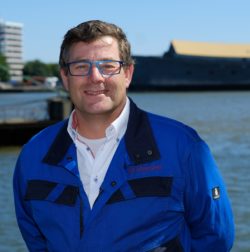 After completing his education as a maritime officer in merchant shipping, David worked for two years on various deepsea vessels of Wijnne Barends.

The son of an inland-shipping skipper, he returned to inland shipping and worked for sixteen years as owner-skipper of a sand dredging barge. Then he worked at the Hoebee shipyard in Dordrecht for two years. He switched to Marinco Survey in 2012, where he was trained to become an junior marine surveyor.

At Marinco he was engaged in on- and off hire of vessels and the performance of condition surveys of deepsea and inland vessels.

David has been an authorised NBKB surveyor since November 2018.